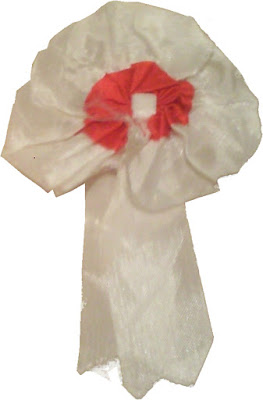 Another Ty-phoo rosette has been found. I always presumed that the red and white rosettes cover all the teams that play in those colours, but now a white and red Stoke City rosette has appeared. I suppose it's safe to assume that this design covers all the clubs who play in red and white stripes. Some colours still haven't been seen, so if you'be got rosettes from Fulham or Newcastle United, or Celtic, Hearts, Blackpool or Leeds United please get in touch.
The previous post can be found here - Ty-Phoo Tea - Famous Football Clubs ~ 1st Series / 2nd Series ~ Premium issue Rosettes (4).