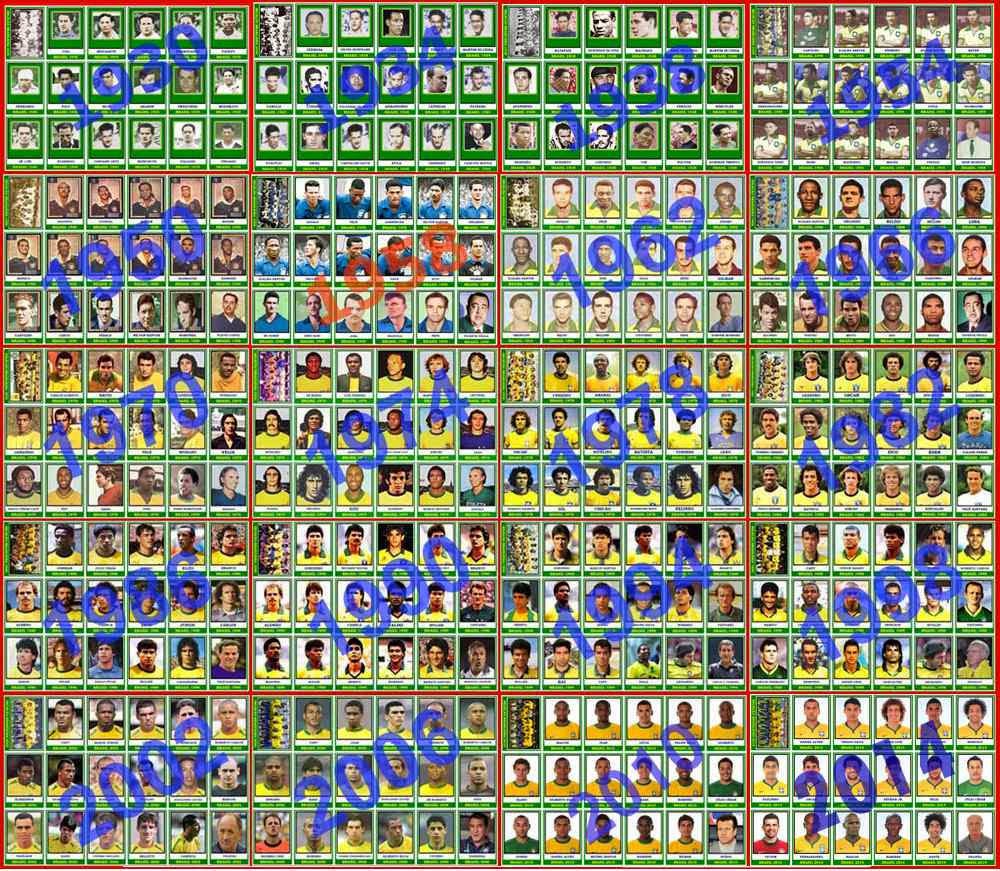 Every time the World Cup comes around Ping Pong updates their Seleção Brasileira collection with new cards. This is the list of new cards, following on from the ones issued in 2010. When the 2010 World Cup came around, Ping Pong issued an update set of 18 cards.

This collection is based on the original 1978 collection of Brasilian League players and would be ressurected and added to for subsequent World Cup competitons. 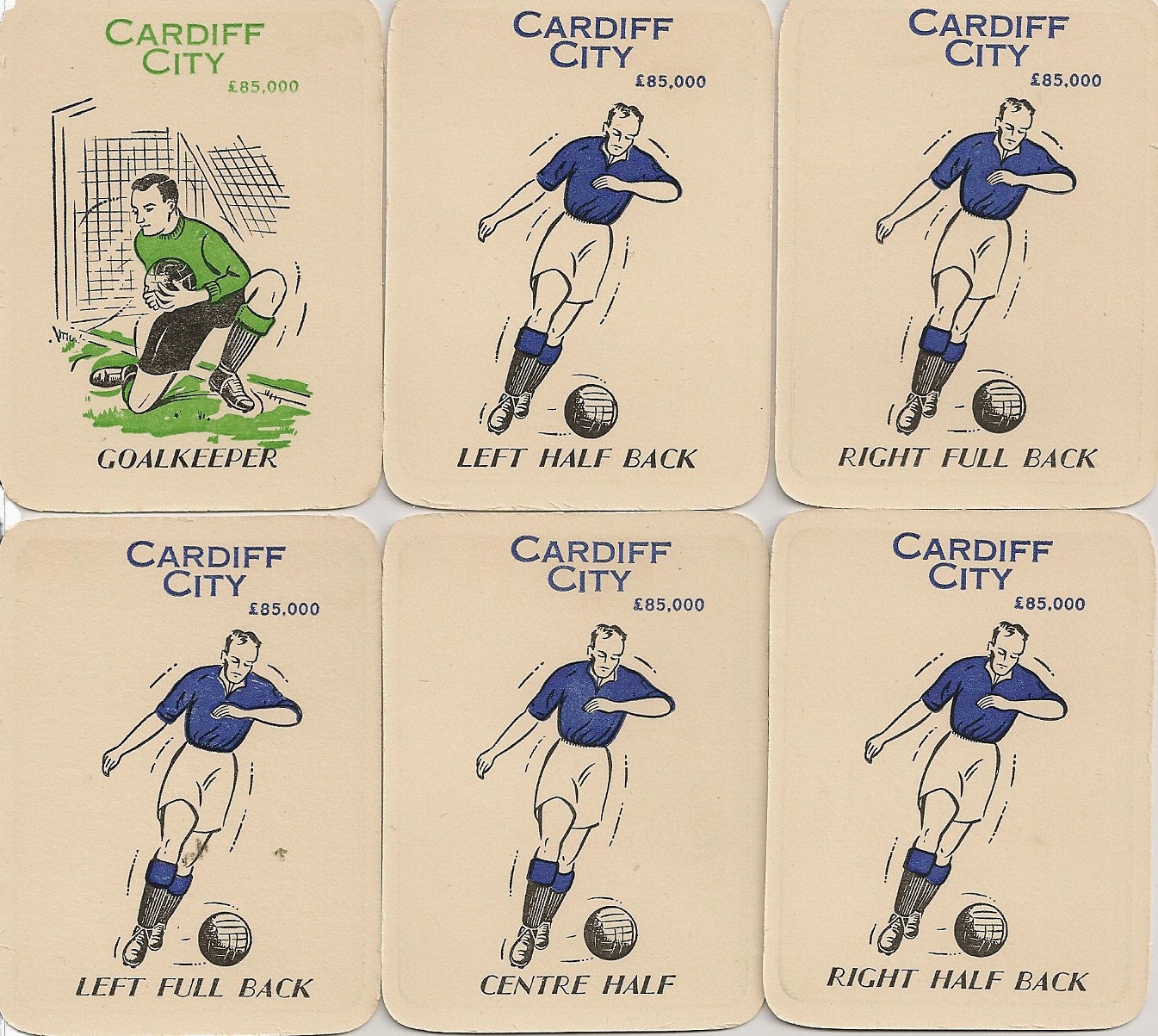 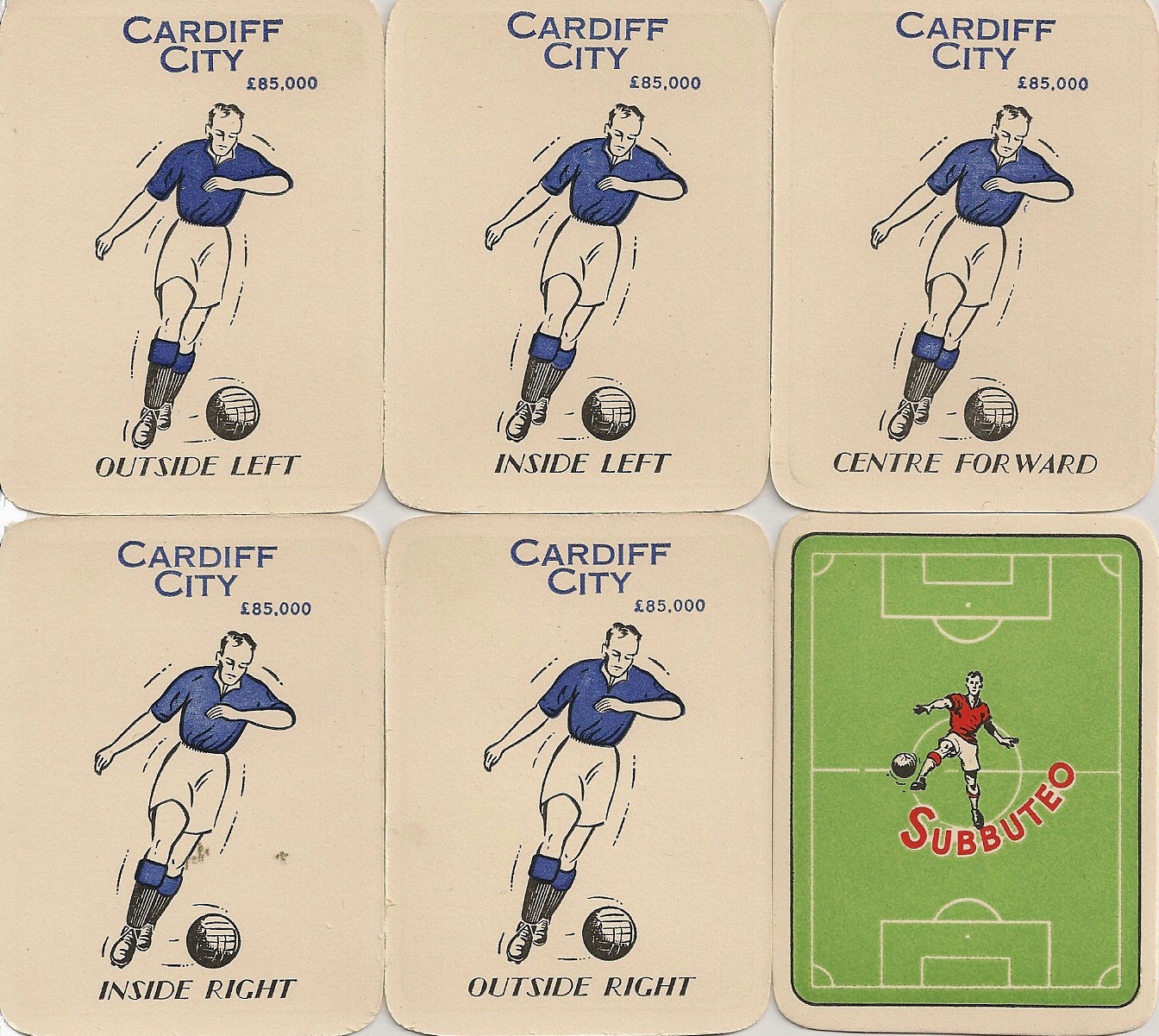 I managed to pick up the Cardiff City cards from this game many moons ago. The whole package is highly collectable, especially among Subbuteo collectors. I used to think this was the only version, but the game was available from the 1947-48 season, throughout the 1950's, right up until 1964-65. I'll include details of another version later. A complete version of this collection is currently on sale on the Subbuteo World website for £349.
I'll include details of the first version later. 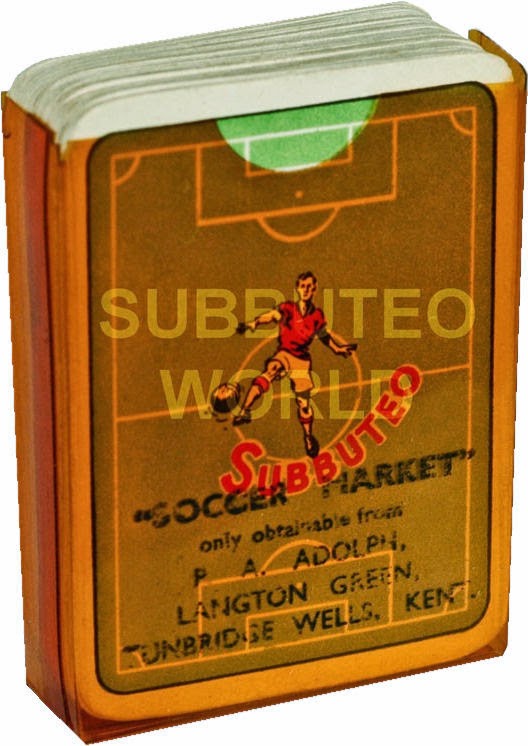 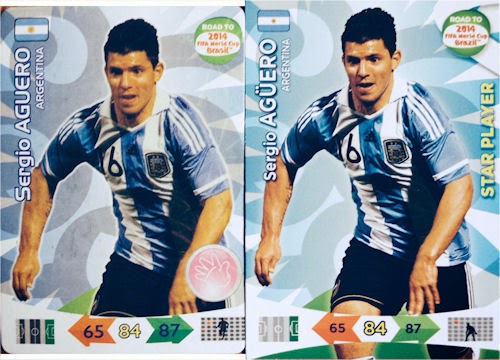 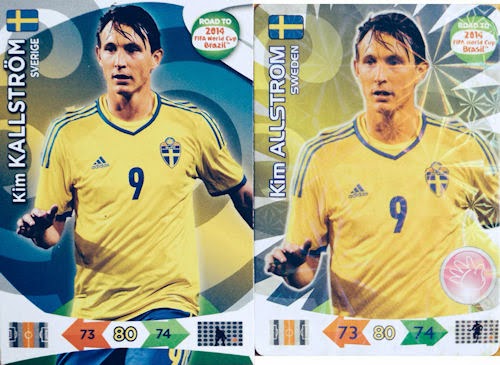 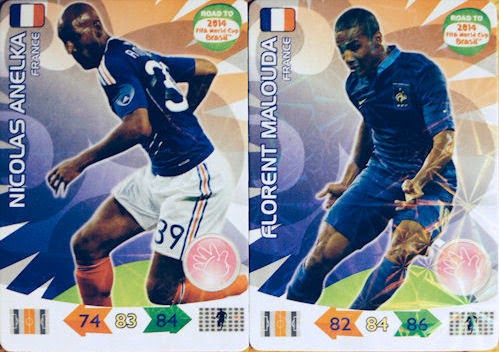 Lee West has sent in some details of cards issued in Argentina that are similar to Panini's Road to 2014 FIFA World Cup Brazil Adrenalyn XL cards. I'll let Lee explain...
These came with some cards I bought from a chap in Argentina. They're like the Panini Road To Brazil collection, but with a few differences. The cards are of lower grade paper, smaller with rounded corners and have a refractive surface. All the country names are in English, there are spelling mistakes on some player names and the pictures have been cropped differently. Also, there are no cards labelled Star Player etc - I've included a couple of comparison photos. Finally there are Florent Malouda and Nicolas Anelka cards in the French team, and I'm pretty sure they weren't in the Panini collection. The cards I have (all base cards) are (with spelling errors are per the card) listed below.
I have numbered this list for reference purposes only, with 64 listed so far. 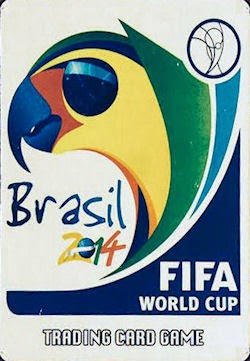 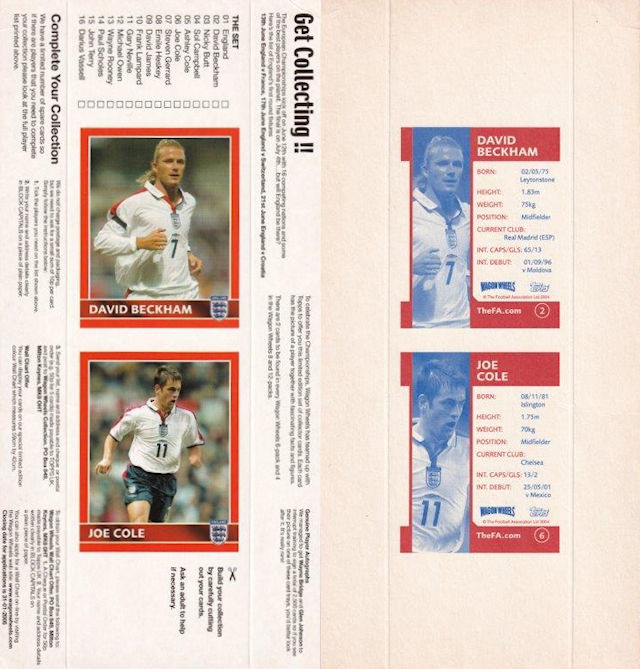 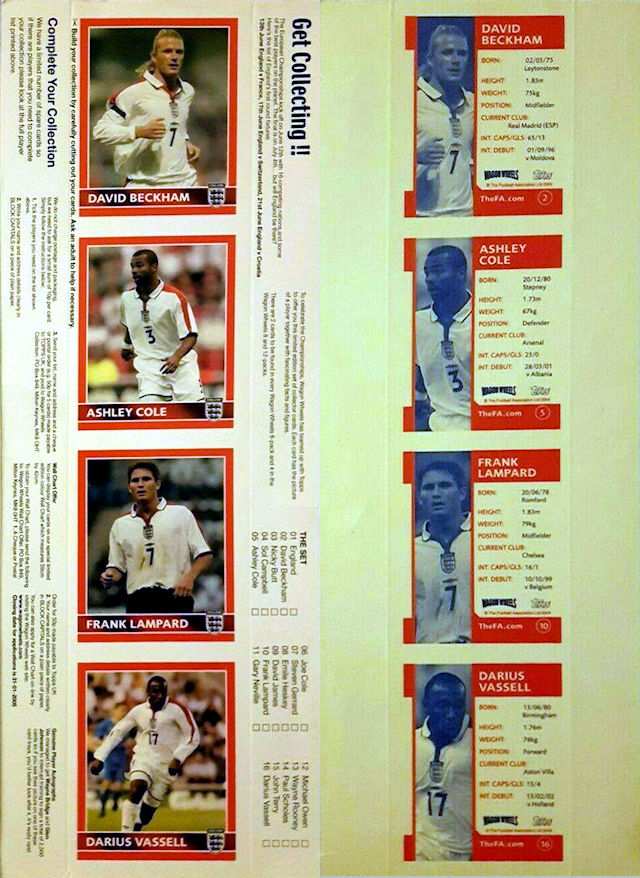 These can be found as uncut sheets with either two cards or four cards. The sheets are numbered here for reference purposes only.
UPDATE (11-07-2022 01:07):  John Levitt has provided a scan that includes a reference to two Genuine Player Autographs and as these two players do not appear on the official checklist it must indicate that there is a ninth 2-card sheet produced, limited to only 2,500 copies. John has also provided scans of the 2-card sheets for an illustrated checklist and I have updated this post with his scans of the David Beckham / Joe Cole sheet. I have also included another scan of one of the 4-card sheets, though the picture quality of this one isn't very good. 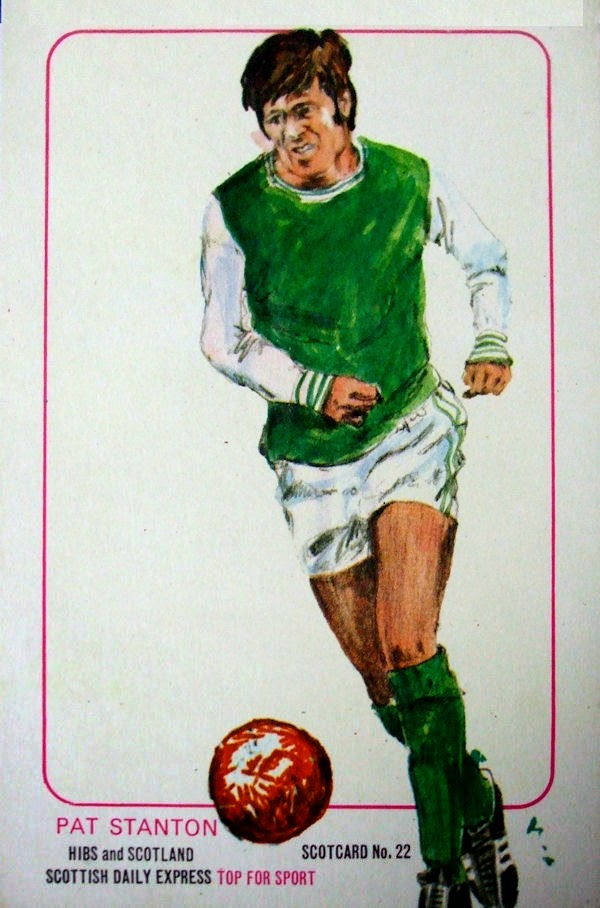 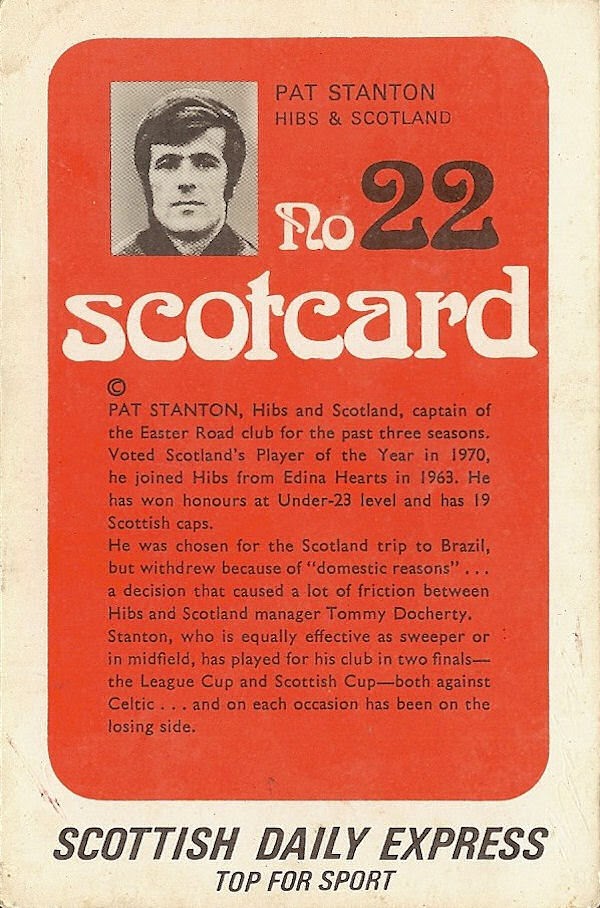 I had some photos sent to me by Brain McEwan and this was one of them. The others will be appearing here over the next day or two. But I wondered why he sent this one, but when I went to look at the checklist I published (Scottish Daily Express - SCO-270 / SCX-4 Scotcards ~ Scottish Footballer), I noticed that I'd omitted this card from the list. I realised then why Brian had sent it. I've now updated the original list to show all 24 cards. 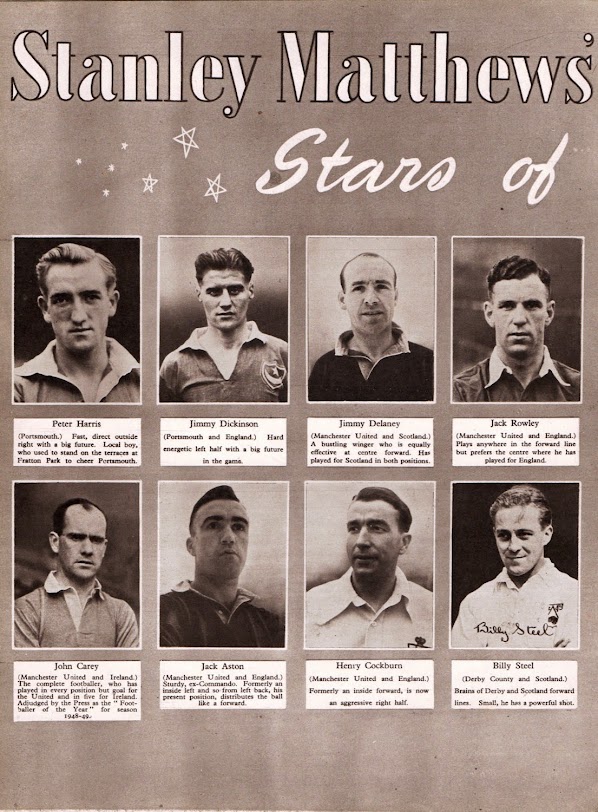 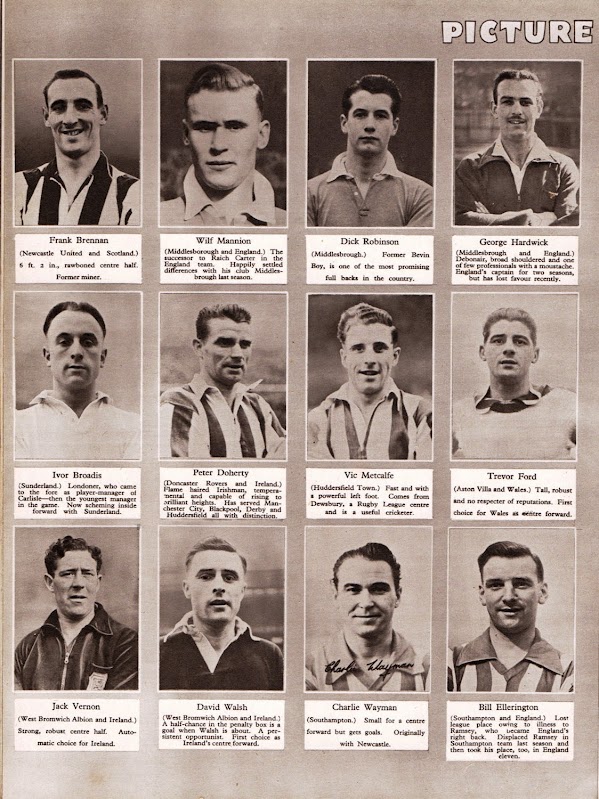 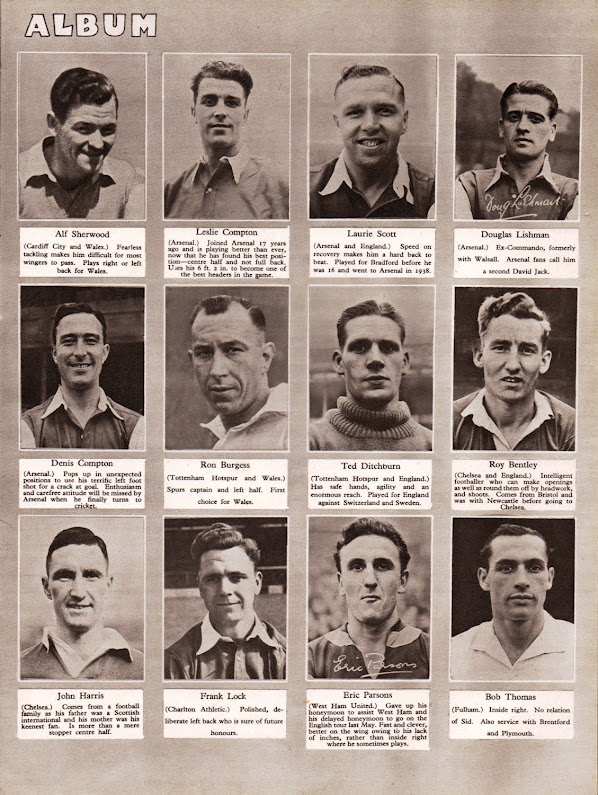 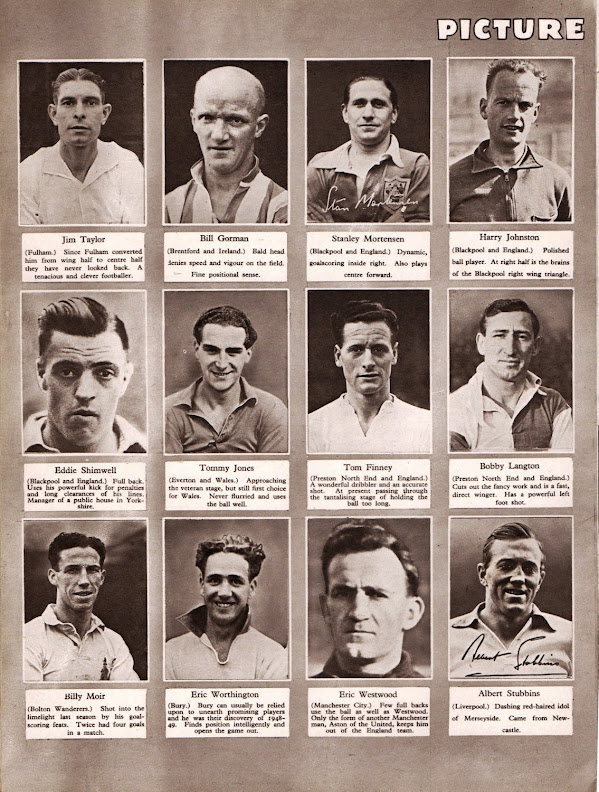 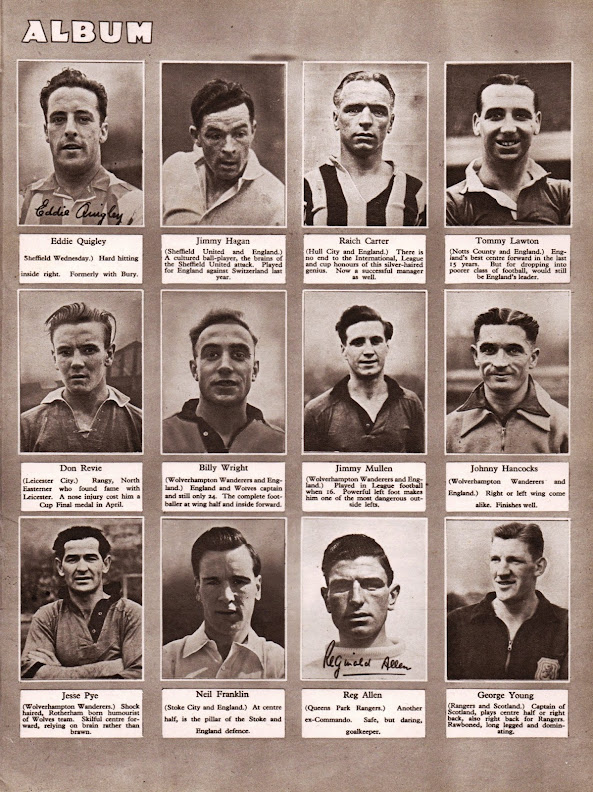 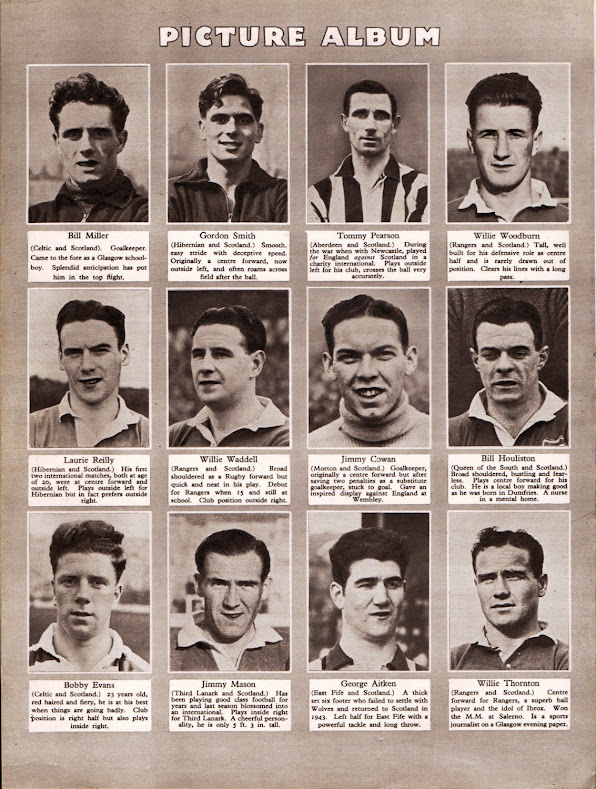 Following on from Bob Thomas' help recently, Paul Briers has been in touch and very kindly sent scans of all the pages featuring the Stars of Today. He also informs me that there are 71 players, not 72, as you'll see in the illustrations. I presumed, wrongly, that as some pages had 12 photos there must be 72 in total! I suppose there is in a way, a Stanley Matthews himself looks through the book... 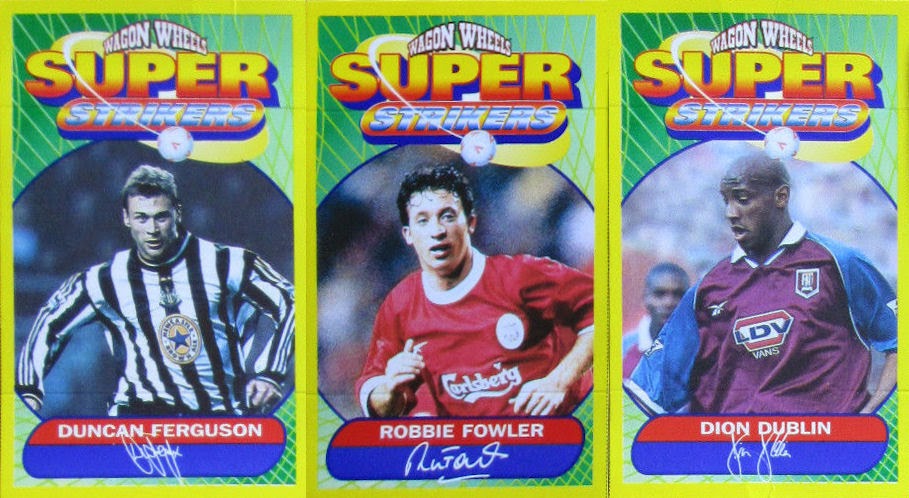 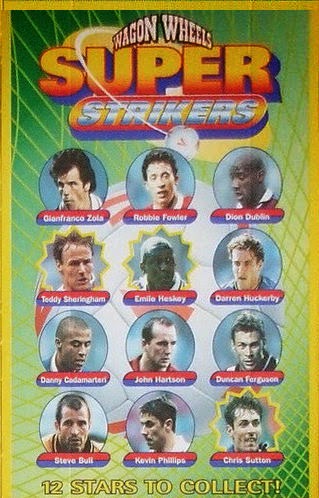 The cards could be found in two versions, a small card - 3 to a sheet, with perforations enabling the collector to separate the cards, and as large cards, the size of the sheet of 3 cards. The sheets of three cards plus the checklist card are unnumbered and are numbered here for reference purposes only. 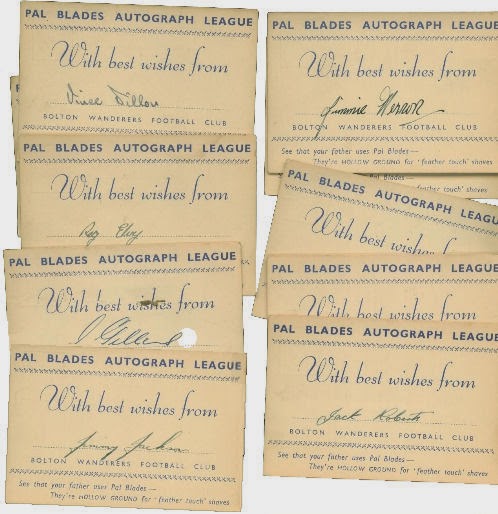 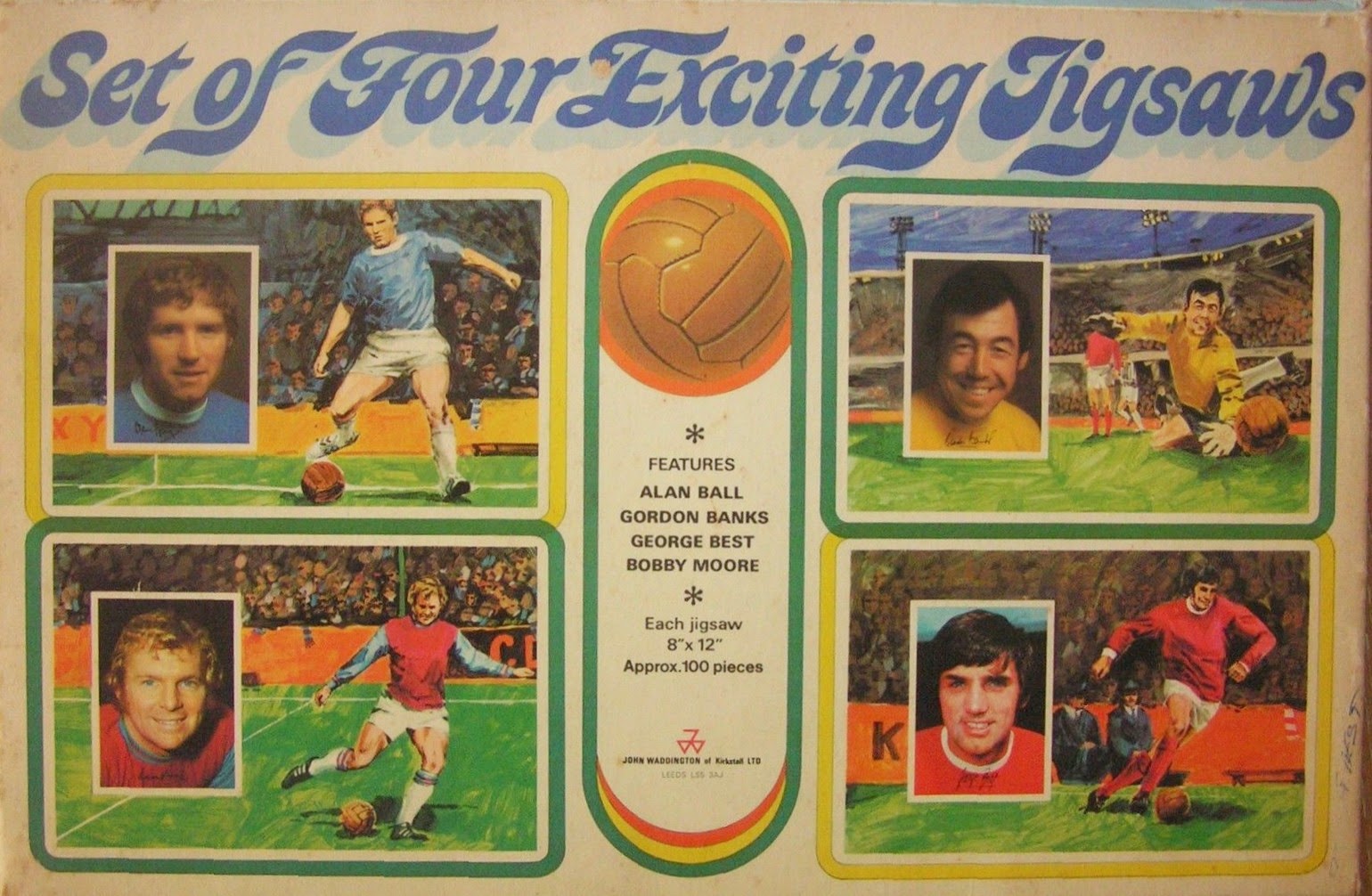 This item was available as a special offer with Shreddies. 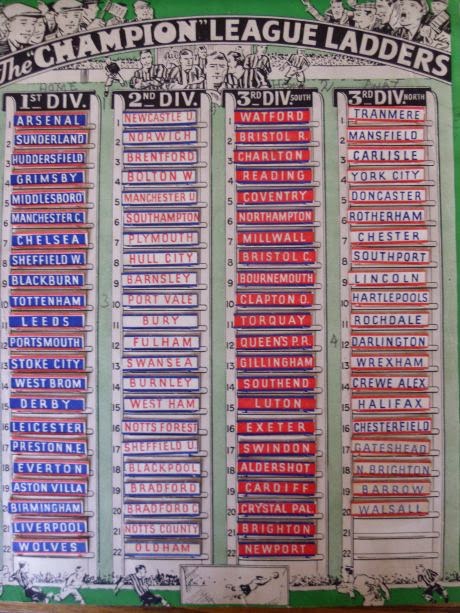 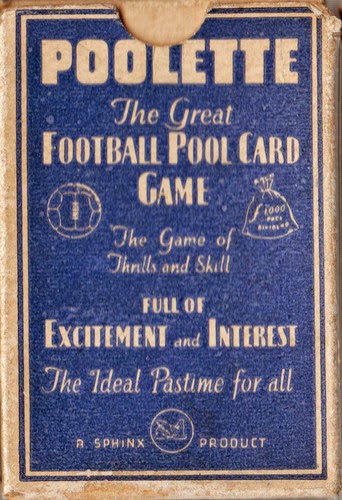 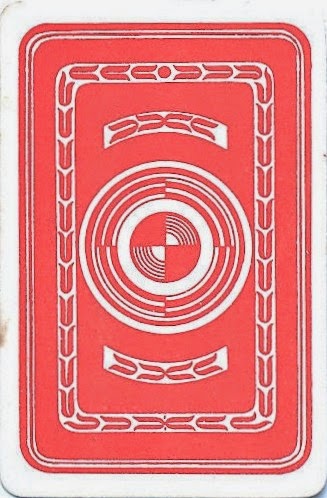 A football whist game. These cards have a red back and were issued in 1938. The game was re-issued after the end of World Car II in 1946. Those cards have a blue back and will be listed later. The cards measure 90mm x 60mm.

"The Game of Thrills and Skill... Full of Excitement and Interest - The Ideal Pastime for all"
2-4 players
How to play:
The 52 cards are split into two different decks. 25 cards are used to Arrange Matches in part 1 of the game. The other 27 cards are used in part 2 - Playing the Arranged Matches.
Arranging Matches: Each player gets a hand of cards and a turn consists of laying down a pair of cards from the same division, or drawing a card from the stack. Depending on the number of players, this goes on until all players have arranged the correct number of matches or there are no more cards to draw from the deck. Points are awarded or lost depending on whether you did or did not arrange the correct number of matches.
Now play shifts to the second deck. All the arranged matches are placed in the middle of the table. These nicely illustrated cards are in four suits, marked A to D. A is trumps. Now you play 6 hands of cards in Whist fashion. Must follow suit, if not can discard or trump. The winner of the most tricks decides the result of any match on the table. He does this by choosing one of three face down cards - Away Win, Home Win, Draw. An Away Win scores him 20 points, a Draw scores him 15 points, a Home Win scores 10 points. Then another hand of cards is played, and the winner chooses a card to be the result of that match, and so on, until all the matches have been played. The points in Part 1 are added to the points in Part 2 and the winner is the one with the most points.
I've listed the teams by the first team alphabetically at the top/bottom of the card, then turned it around so that that team is at the top, with the middle teams reading from left to right, followed by the card at the bottom.