These are not to be confused with another series of Football caricatures issued by Webcosa which come with a yellow background.

For their Christmas issue Match magazine issued a large poster with photos of players from across the full spectrum of Premiership and Football League clubs, plus many Scottish League clubs too.

The three photos here (click on them to see larger versions) include all the players I don't recognise, though since the photos were compiled some players have been identified. It's safe to assume that these players were with these clubs during the first half of the 1998-99 season.

Any help with identification would be great.

I still can't identify the 1st, 14th and 19th players in this framed collection. Any help would be much appreciated.

Here is a list of the cards so far:


These inserts were given away with the Northampton Town Official Programme during the 1938-39 season.

Only two items known, please get in touch if you can add anything to the list or can supply scans of any of the others.

I don't know anything about these postcard size items. The only 2 subjects I know of are Dundee F.C. players. I presume that the series also includes players from other Scottish clubs.

I haven't discovered anything regarding the Football Post either. There was a newspaper by this name that started in 1903 and was published in Nottingham, but as these players are from Dundee that seems an unlikely source.

Apparently these photos/prints were given away with the Blackpool F.C. Official Programme in 1935-36 season.
A first glance at the jersey might make you think that it couldn't be a Blackpool player, but the club played in dark and light blue stripes between 1933 and 1938. Check out the Historical Football Kits website (http://www.historicalkits.co.uk/Blackpool/Blackpool.htm).
I only know of 2 of these inserts so far. Any further information would be much appreciated. I'd also be interested in finding out which players were giveaway with which programme. 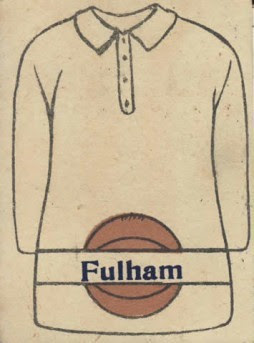 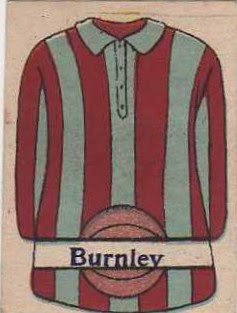 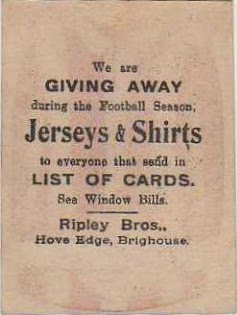 These cards are very rare. The card shown here was recently for sale on eBay with a starting price of £95. I was hoping to try and date the card by checking when Burnley played in these colours, but when I checked the Historcial Football Kits website it was nowhere to be seen.
Here's a list of known cards, it features rugby clubs as well as football clubs. If you know of any others please get in touch.
UPDATE (03-12-2017 13:11):  Wigan Boro' added to the list, thanks to Mark Hughesdon. The cards are unnumbered and are numbered here for reference purposes only.
UPDATE (04-12-2017 16:49):  Following further research the date of issue has been amended to 1923-24.

These cards were issued around the late 1940s, there were a number of series, but I haven't been able to complete the checklist for this one.
The cards were issued as little booklets of 5 cards plus a wrap-around cover that was numbered like the cards inside.
I've listed the covers separately, as well as including them in the proper checklist.
I'd be grateful for any help with the missing details....

There are at least 4 different cards for some clubs, some come with different illustrations, some with actual players, others use different typefaces. Some of the team are rugby clubs and show rugby scenes.

I will try to include all the different illustrations I have for these cards. If you want to see a specific club please let me know.

Known cards, though I don't have illustrations for all of them....

I don't know anything about this set, other than they seem to have been issued un the 1930s.

If you have any information, please get in touch.


The set includes the following, though it’s number is not known: