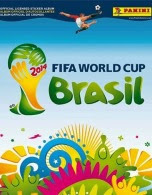 G.T.S. Distribution (an American card distribution company) hosted its Northeast Open House on Thursday (12 September, 2013), inviting dozens of dealers. Several companies, including Panini America, Upper Deck and Wizards of the Coast presented news and upcoming products to the dealers at the Hilton Hotel in Newark, New Jersey. Here’s a round up of the news regarding football (soccer) releases.

The last time Panini sold the stickers and albums, it sold 1.5 billion worldwide with 12 million in North America. These will be available in April, 2014.

This will be a worldwide product. Each continent will get its own Prizm-coloured borders.

Autographs in this product include Pele, Lionel Messi and David Beckham. It is due out in June, 2014.