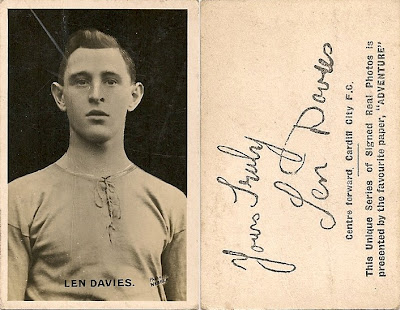 Hi Alan, I was pointed to your site via a friend who also collects football cards. we are both members of the same card collecting forum. Anyway, I noticed you don't have these cards from 'Adventure' on your site and was wondering if they are the sort of thing your interested in posting. They were issued by 'Adventure' comic published by D.C. Thomson in 1923, a series of real photographs with printed autographs on the back. (see attached picture for example). As far as I can find out there are 10 in the set. (Jimmy also lists the 10 cards). No. 9 E. Simms does not have a team printed on the back of the card. They are not numbered. Different fonts and print positions were used on the backs, suggesting that they were not printed in the same place or same time, either that or quality control didn't matter back then. Anyway hope they are of interest. All the best, Jimmy Gibbon.

A total of 36 cards were issued. For the first 14 weeks different cards were issued in Scotland. These have been identified in the listing with flags of the two countries. I've also included the issue dates and the issue numbers of Adventure. Syd Puddefoot was a West Ham United player when his card was issued in England. He later transferred to Falkirk and the comic hastily included him in the Scottish release, though the same picture was used with both cards.