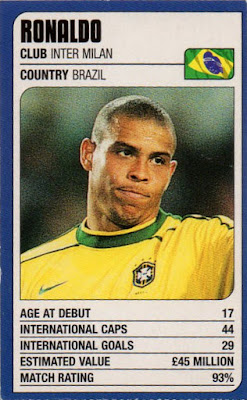 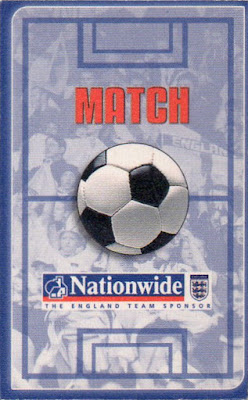 Stu Fairbridge sent me scans of this card. I've seen others from this set in the past and always ignored them as I presumed I had a checklist in my database, but I was wrong. Ronaldo received his 44th cap by the end of 1998, so these must have been issued some time during the 1998-99 season. Can anyone provide further information such as a set title, number of cards and list of featured players?
UPDATE (03-04-2017 21:14):  Stu has done some more rooting around and found out that these cards were issued in 2002 - with that information I found them in my database. The cards were issued in pairs joined at the bottom edge with the top card normal and the bottom card rotated 180° so that they are perforated along the bottom edge. These cards were issued with Match magazine dated 1 June, 2002 and here's the checklist.
UPDATE (20-06-2021 23:46):  I think I've been able to compile a list of the 18 pairs of cards, but I am not 100% certain of it's accuracy.