Well, here are the results of my research, but I really don’t know what it proves! I was hoping to be able to ‘pin down’ a definite year of publication but I am unable to do that although I would suggest that 1922 is wrong and I will set out my reasoning why.

The first task was to confirm the names and careers of the footballers involved and I have done that, together with comparing the images to those of the 1920-c1923 PINNACE cards. It is noteworthy that the V.C.C. cards use EXACTLY the same images as that set, although occasionally slightly enlarged or diminished but this is no surprise since there were ‘stock’ photos used at this period of football history. There are, however, a few question marks which arise regarding the results, viz:

1. F. Gough is actually Harry Gough, the Sheffield United goalkeeper. He appears as H. Gough in the PINNACE collection with this exact same photograph and the correct initial.

7. R. Butler (Bury) is the real spanner in the works as he appears with the very same picture as an Oldham player in the PINNACE collection but NOT as a Bury one. He moved from Oldham to Bury in May 1923, which means that the set CANNOT have been printed before 1923, which scuppers the 1922 thinking. 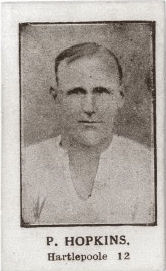 12. P. Hopkins of Hartlepoole (sic) can only be W. ‘Tot’ Hopkins who was at Hartlepool between 1921 and 1923. He is their only Hopkins from that period although the pictures that I have are a worry; is this the same player? The hairstyling suggests that it could well be. I can find nothing about him on the internet and was provided with details – and the second photograph – by the club itself.

13. Jack Atkin of Derby had retired from football in 1921 – why include him? Strange choice.

16. Henry A. White appears in both the VCC and the PINNACE sets as an Arsenal player, which he was between 1919 and 1923, moving to Blackpool in 1923-1925. As far as I can ascertain, he does not appear as a Blackpool player on a PINNACE card.

22. Ernie Simms appears for two teams in the PINNACE cards, notably South Shields in the first place, then Stockport in the later print runs (he moved there in 1924).

24. Edward ‘Ted’ Beeson of Wycombe Wanderers is another strange one because he never played a single game for WWFC in the first team, and only represented the Reserves for one season 1921-22. Again – why include him?

Which brings me to the three ‘gaps’ in the set, cards which have not yet been sighted. Alan Jenkins has found other ‘anonymous’ cards which are very similar and employ the PINNACE images and I believe that three of these are indeed the ‘missing links’, viz:

All three of those players feature in the PINNACE collection for their respective teams although the Layton card throws up another problem as he has been seen as a VCC card number 22 but with the numbering on the front being in a different position – bottom left rather than bottom right and also larger than is normal for this set.

Originally I was hoping to say that the set was definitely issued in 1922 because that was when most featured players were at their respective clubs, but then the Butler card threw that theory out of the window and so now we have to look at 1923 …
The other anonymous cards of Jack Hill (Burnley, 1923-28) and F. Graham – another error; should be Leonard Graham – (Millwall, 1923-33) I am going to suggest are NOT amongst the missing three cards in the V.C.C. set simply because they do not appear in the PINNACE collection.

So where does this leave us? Well, if I had to stick my neck on the block, I’d say that the V.C.C. set were issued sometime in 1923, probably summer, and the ‘Anonymous’ set came later – most probably 1924 – simply because they include players who not only are not in the PINNACE set but, more importantly, had changed clubs since the V.C.C. cards with White – and Simms in particular – being the ‘key’ cards to support this argument.

The five players in the list below that are not identified as being in the list of V.C.C. cards probably provide the three missing cards; my guess would be those marked *

Ernie Simms (Stockport County, 1924-26) This is one of the anonymous issues: later team and is NOT in the PINNACE set

Henry A. White (Blackpool, 1923-25) This is one of the anonymous issues: later team and is NOT in the PINNACE set