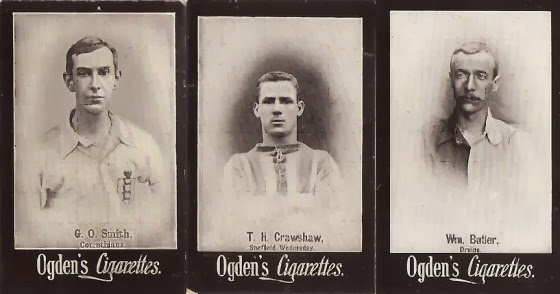 This is going to be an Ogden's weekend. I hope to list every football card issued by Ogden's in the late Victorian/Edwardian period, in no particular order, that I know of. I don't confess to be an expert so I would be glad to hear from anyone who can add further information on all these series.
I don't have any examples of cards from the Lady Cricketers & Footballers series and would welcome scans of any of these cards to illustrate the list of known cards from this series.
General Interest (95) is an unnumbered series, Tab type, measuring 68mm x 40mm with plain cream backs.
UPDATE (04-05-2016 18:53):  I originally had J. Sharp listed as an Everton player, but Paul Chauveau has informed me that he is actually the Preston North End player of the same name. Here's a link to the recent update published on this blog - Ogden's Cigarettes - General Interest (95) (03) - Jack Sharp.