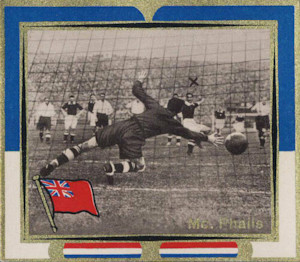 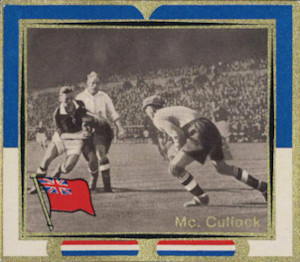 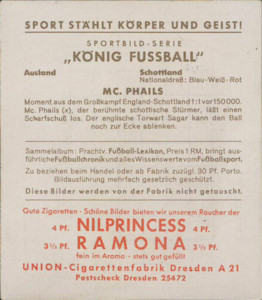 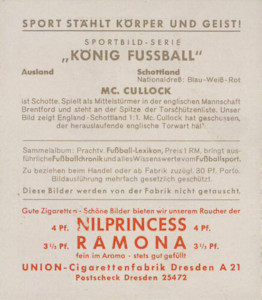 1938
König Fussball
Union Cigarettenfabrik, Dresden
Zepter Zigarettenfabrik, Dresden
Turbaco Zigarettenfabrik, Hamburg
Germany
340+ cards
John Howden has informed me about an interesting debate on Vintage Football Card Facebook Group about the McPhail card, number 186 in the Konig Fussball 1938 set.
The general consensus is that this card is in fact Tommy Walker of Hearts and not McPhail. McPhail did not play in the 1936 England v Scotland game, but did a year later when he scored two goals but no penalty. The video footage from the 1936 game shows the Tommy Walker penalty and looks to resemble the action shown on the card itself, albeit from a different angle. The image on the McCulloch card is also from the 1936 game. The links below show details for the Scotland v England games in 1936 and 1937 on the England Football Online website. Also included is footage from the game in 1936 showing the penalty.
The most up-to-date player list can be found here - Union Cigarettenfabrik - König Fussball.
UPDATE (20-11-2020 17:11):  Paul Chauveau has reminded me that he covered this subject some time ago - Union Cigarettenfabrik - König Fussball (06). I should be more vigilant but with nearly 24,000 posts on this blog it's almost impossible to keep track of all the subjects covered.
England Match No. 202 - Scotland - 4 April 1936 - Match Summary and Report
England Match No. 208 - Scotland - 17 April 1937 - Match Summary and Report
Posted by Alan Jenkins at 14:00:00