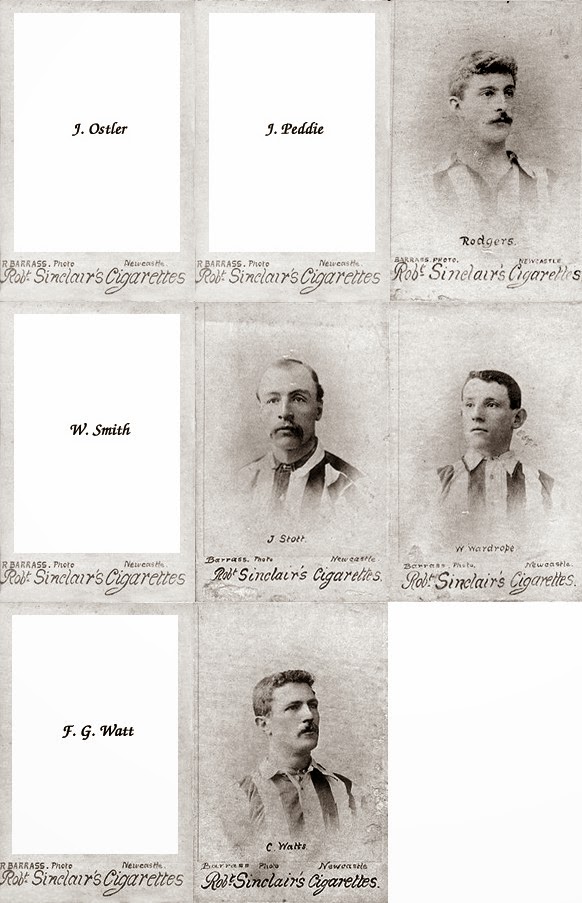 Peter has been doing some more research on these cards...

I have made a sheet of the Robert Sinclair Newcastle United team series from 1898. I think your date was 1899. It's definitively 1898 and is a set commemorating Newcastle United's first season at the top level. All the players and staff included are from the start of the 1898-99 season (September). I wonder if the set should include four other cards: Ted Birnie, Sandy Higgins, Jock Peddie and William Smith. It would make a 20 cards set. All those players started that season and should be included. It would be more than strange if not.
According to my calculation it contains 20 (21?) cards. Ted Birnie was a new signing, from a local team, and he didn't appeared in the official team photo taken at the start of the season. So, it's possible the 20th card could be of William Nesham, the club Chairman. The appearance of the Club Trainer and Club Secretary rather confirm that theory. The round number of 20 cards is more likely than 21 I think. I know nothing about the Sunderland players in this set. Nevertheless it has to be a different series.

I have to agree with Peter regarding the reference to the Sunderland players being a different set. A new card was added to the list of those recorded by the Cartophilic Society of Great Britain and Peter has sent me a scan of this same card. It's design is different to the cards of the Newcastle United players so I've removed them from this listing and will be doing a separate listing for the Sunderland cards. I've amended the title of this thread to refect this. It is also possible that there may not be mauve paper versions of these cards.