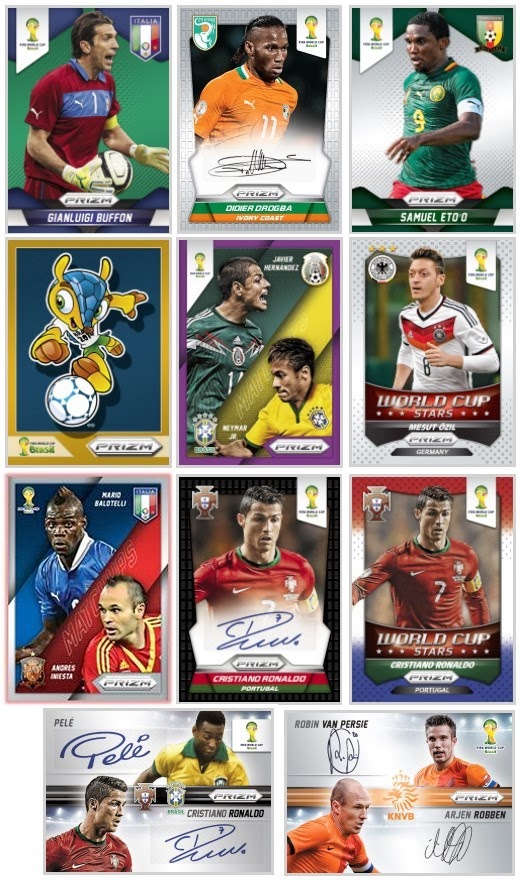 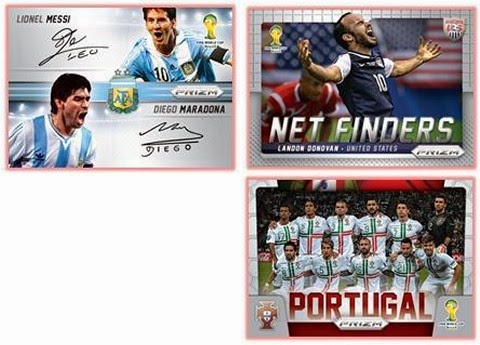 A press release from Panini...

Call it the “Product Heard ‘Round the World.” Panini America on Thursday announced that it will be producing a standalone Prizm product devoted to 2014 FIFA World Cup Brazil, a development that effectively takes one of the company’s most popular technologies global while creating a compelling product sure to be coveted by an international audience.

Boasting an autograph checklist that will easily go down as one of the greatest ever assembled for a soccer release, Panini America’s 2014 FIFA World Cup Brazil Prizm set includes signatures from the likes of Lionel Messi, Pelé, Cristiano Ronaldo, Robin van Persie, Clint Dempsey, Tim Howard, Jozy Altidore, Ruud Gullit and many more. Set to release in late April, each box of the product (six cards per pack, 24 packs per box) will deliver eight Prizm inserts (featuring a new array of regionally inspired color combinations) and five insert cards.

The debut release is chock full of history-making soccer cards. Some of the highlights . . .

The product features a 200-card base set featuring players from all 32 teams qualified to participate in the 2014 FIFA World Cup. We’ll have plenty more to preview on the historic 2014 FIFA World Cup Brazil Prizm set in the coming weeks right here on The Knight’s Lance, but for now enjoy this extended sneak peek.


All information is accurate at the time of posting. Content is subject to change. Card images are solely for the purpose of design display.