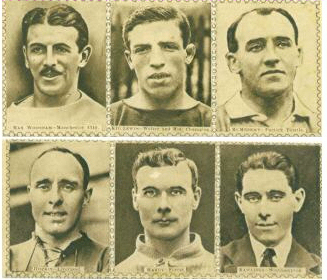 Gregory Graetz sent me photos of three boxers from this collection, which reminded me that I haven't featured these before. I have so much information to include on this blog that sometimes I get side-tracked and end up not including sets that I had intended to include. This set is one of those. Only 24 of the larger 'stamps' were issued and are listed here. I only have information on two of the eight sheets, the others are listed alphabetically. I never did manage to track down a complete sheet featuring Cardiff City's Len Davies, nor Stan Davies and Hugh Ferguson, two other players with Cardiff City connections. The sheets are unnumbered and are numbered here for reference purposes only. You'll find the previous articles here:
FOO-040/ZJ5-74 Sportsmen
FOO-040/ZJ5-74 Sportsmen ~ Football & Sports Favourite and Sports Fun Photo Stamp Album (2)
FOO-040/ZJ5-74 Sportsmen ~ Football & Sports Favourite and Sports Fun Photo Stamp Album (3)
UPDATE (12-12-2017 18:51):  I originally had George Robey, a music-hall artiste, in this checklist because previous works of reference have included him in the list of subjects. Gregory Graetz has pointed out that my list originally missed McCormick (Light Heavy Champion). I presume I stopped adding names to the checklist once I had found 24 names, not realizing that George Robey doesn't appear. McCormick has now been added.