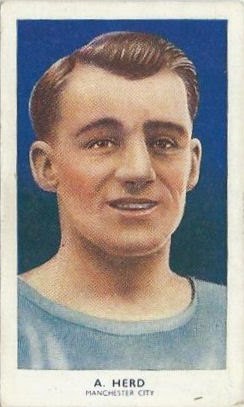 Another card illustrated. Just 12 names missing now.
I thought I'd update and reprint the relevant parts of the original article I did over eighteen months ago...

These cards by Chocolat Tobler can be found with and without the brand name printed at the top of the card.  The cards are very similar to the set of Famous Footballers issued by R. & J. Hill in 1939, and many share the same illustrations. In the chart below I have indicated those cards known with Tobler Chocolate printed on the front of the cards and those without the name printed on them. As you can see, many more are known without the brand than with. You will also note that five known cards have not yet been verified as to whether they are with or without the brand name.
I first thought that all 50 cards were available with and without the name printed, but now I’m not too sure. I have yet to discover any card that falls into that category. So, do we have two sets of up to 50 cards per set, or is this one set of cards where some have the brand name printed on the front and some don’t? I would be interested to know what other collectors might think.
Of those cards that I have so far identified, all the ones without “Tobler Chocolate” are the cards that also appear in the R. & J. Hill set and those cards that are inscribed on the front do not appear in the Hill set.
I have added a column to the first chart indicating the number of each card in the R. & J. Hill set that is similar to the equivalent card in the Chocolat Tobler set. I have also included a second chart listing those Hill’s cards not yet linked with the Tobler set.
Up to card No.22 it looks as if additional subjects may have been included in the Chocolat Tobler set. Either that or they moved some higher numbered cards so that they appear earlier in the set. It is also possible to hazard a guess as to which cards between Nos. 25 and 50 might appear in the Chocolat Tobler set and which cards may have been omitted. We are more likely to find that No.50 in the Chocolat Tobler set would feature E. Brook of Manchester City, rather than J. Guthrie or J. Shadwell.