Stuck On You ~ The Football Sticker Story (ITV 4) 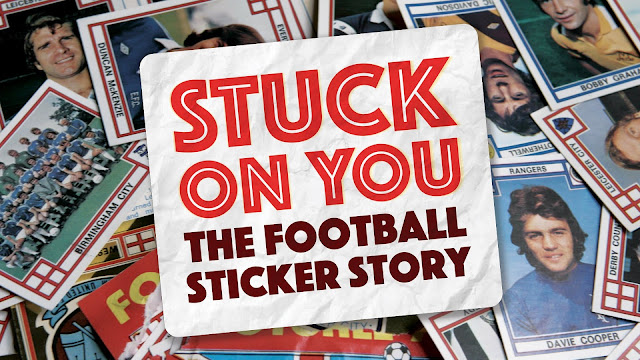 
Following on from Greg Lansdowne's superb book on football stickers a new television documentary - Stuck On You ~ The Football Sticker Story - airs on ITV4 next Tuesday evening (14 November) at 10:15pm.

“You would see kids with big bundles of stickers and elastic bands and covered in plastic, around in a circle, just saying, ‘Have you got this one, have you got that one, I’ll swap you this, I’ll swap you that.’ Trying to fill your book was huge. And yeah, I never managed to fill my book.” - Ryan Giggs

This new documentary for ITV4 tells the tale of the humble football sticker, which started as an addictive playground pursuit and ended up a multi-billion pound industry, resulting in a corporate slugfest between tabloid titans at the peak of the market in the late 1980s.

With contributions from sticker album mainstay Ryan Giggs, superfans Pamela Gupta and Perris Hatton, along with the son of one of the founders of industry giant Panini, this programme gives a vivid insight into how the phrase, ‘Got, not got, need,’ entered the language of children across Britain as they attempted to complete their albums.

The documentary also unravels the story of how four men at the heart of the UK sticker craze - Kelvyn Gardner, Peter Warsop, Mark Hillier, and Peter Dunk - left Panini to strike out on their own and the rocky path that followed as the humble sticker grew beyond football and into the realms of music, wrestling and even the Royals.

The story starts with Italian firm Panini, who had invested in large-scale sticker making machinery. Prior to their expansion into the British market in the 1970s, the best football-mad kids could hope for in the wake of England’s 1966 World Cup Victory was to glue low-quality cards into albums themselves.

The British arm launched the stickers in 1978 with Shoot magazine, and interest in them rocketed. The Panini stickers and albums were much higher quality than previous ones, with proper pictures of players, a team photo - and most importantly, a foil badge known as a shiny, says Perris Hatton: “No glue, no licking, no mess, just straight in the book. Got the uniformity and the standardization of having the players in their kits, head and shoulders, looking very smart. We also had a team picture as well and also the shiny sticker, the team badge. Proper shiny, gold.”

As the UK market exploded, the team launched a new sticker set - in tandem with freshly-launched teenage pop magazine, Smash Hits. Pamela says: “Every year just before my birthday in April they would bring out the sticker album. You would rip open these stickers and you’d be like, ‘Alright, John Taylor. I really needed John Taylor.  Maybe like Rick Astley, ‘Oh, god, I hate him.’”

The firm sold tens of millions of packets, but when they launched a new album of Royal stickers - approved by the hierarchy - they realised they had found a new audience. The firm’s marketing man Kelvyn Gardner says: “WH Smith, they decided to run little swap shops for the Royal Family Sticker Album in their stores and I was incredibly surprised to see the queue to swap stickers was in fact nearly all old-age pensioners.”

The sticker boom - fuelled by the ‘86 Mexico World Cup album - brought Panini to the attention of Robert Maxwell, who owned the Mirror, and Rupert Murdoch, who owned The Sun. Both news organisations pitched to Panini to do a promotion in their flagship newspapers. But when The Sun won the contract, Maxwell decided to buy Panini itself. Maxwell's son Kevin says: “I think that led to the decision that, ‘You can’t beat them, buy them.’”

The foursome at the top of the British business knew Maxwell would install his own staff in their place, which meant they decided to set up by themselves – as Merlin. But Maxwell issued them with a lawsuit and attempted to stop them trading with other businesses by taking away distribution of the Daily Mirror. Mark Hillier says: “I can remember going home to my wife and my kids were really young and saying, ‘Well, you know, I think by the end of this week we’re probably going to lose everything.’ And so, yeah, it was pretty scary.”

Merlin’s last roll of the dice was to bring out a sticker album featuring the fledgling World Wrestling Federation stars of the day like Hulk Hogan and Hacksaw Jim Duggan. The federation was developing a cult following among young boys - and sales rocketed as soon as the album launched. Peter Dunk says his experience on the road was typical: “So, the news agent was empty. Just a lady behind the counter and as soon as she realized I was from the company that produced these stickers, she said ‘Oh, have you got any stock in your car.’”

Shortly afterwards, Maxwell fell off his boat and died - Panini was promptly sold off, and the lawsuit faded as well. Kevin Maxwell explains: “When my father died, the business imploded and all of the operating businesses of which Panini was one, was sold.”

Meanwhile, the UK football sticker market was in decline until the foursome pitched an idea for a new, much higher-quality album to Rick Parry, the chief executive of the then-new Premier League. Perris Hatton compares the launch of the album to the high-quality Panini ‘78 edition: “Merlin did the same 16 years later, from nothing to having the Premier League deal in ’94, in just four short years, was nothing short of miraculous.”

The sticker boomed again, with thousands of kids meeting at venues to swap their stock. The meets were so popular that Premier League heroes like Ryan Giggs, who featured on the cover of that ‘94 album, were called in to star at the venues. Ryan says: “I remember turning up and you’d hear on the radio that the walkways were blocked and massive delays because all of these kids were just going to one place just to get the stickers that they needed or meet one of their heroes, so it was huge.”

After the mid-’90s boom, the foursome sold out to US sticker giant Topps, which later led to a resurgence by rivals Panini, who sensed that adults were now buying the stickers as well as children - going on to sell tens of millions of copies of their 2014 Brazil World Cup album. Pamela explains that somehow, the humble sticker endures. She says: “I think there is just something about even in this digital age where you’ve got everything on your phone and iPad, it’s still nice just to handle something. There is something very basic and simple about a sticker, and it’s glossy and it sticks.”