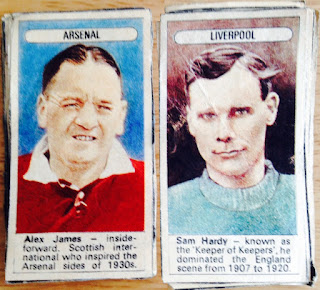 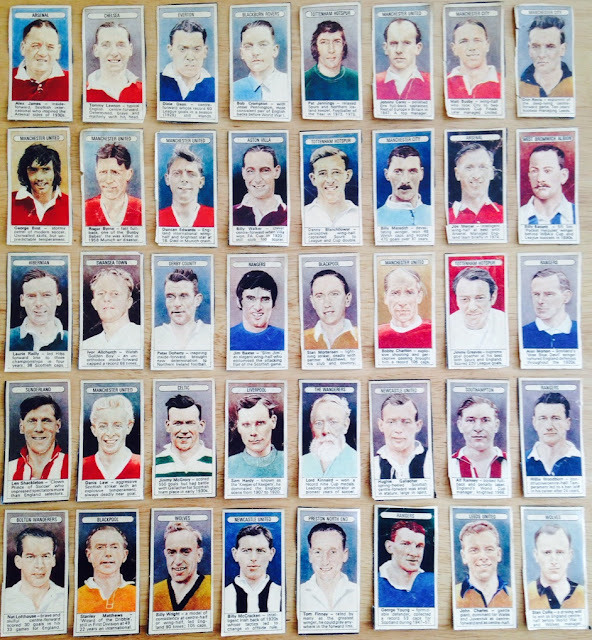 1976
We Are The Champions
The Observer Magazine
40 cut-outs

Phild from the Football Card Forum has been sent these pictures by a collector hoping he would be able to provide some information about them. Phil was stumped and asked me if I knew anything, but I'm in the same position. I've never seen these before. They are listed here in the order they appear in the photograph.
It is presumed they were from the late 60's or early 70's as Swansea are known as 'Town' rather than 'City', so it probably means these were issued during or before 1969. They look as if they come from a colour supplement of a national newspaper such as The Observer. I think only the broadsheets produced magazine supplements back then, though I could be wrong.
Does anyone recognize them and further information about them?
UPDATE (21-06-2015 16:43):  Paul Chauveau has been in touch to let me know the Pat Jennings biography mentions 1975, so my reference to Swansea Town isn't really relevant after all!
UPDATE (22-03-2016 12:07):  The list has been reorganized so that players are listed in alphabetical order. The 'cards' are unnumbered and are numbered here for reference purposes only.
UPDATE (20-09-2016 14:34):  Paul Bowditch has sent me an e-mail to confirm that these were featured in The Observer Magazine dated 19 September, 1976.