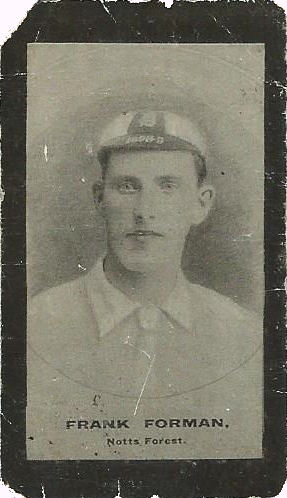 Auchinleckian has sent in a scan of the Frank Forman card. My list and the one compiled by David Thompson, in his book Half-Time, has him listed as an Arsenal player. He never played for Arsenal so that entry must be a mistake. I have amended the original list. Auchinleckian also adds, I noticed you also thought that the set was from 1901, not 1905. The details on the back of this card would seem to bear it out as it says he played for England vs Scotland in 1898, 1899 and 1901. As he also played against them in 1902 it would seem strange to ignore this fact on a card if printed later than that?
The original checklist can be found here - F. & J. Smith (Cup Tie Cigarettes) - Footballers.