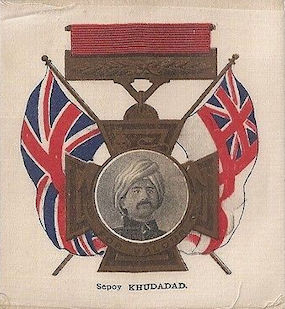 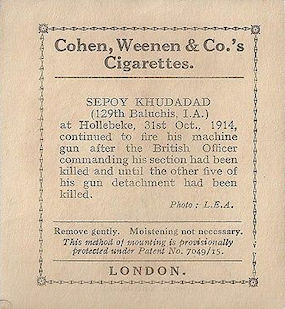 1915
Victoria Cross Heroes - 2nd Series
Cohen, Weenen & Co.
16 silks (1 football)
Lance-Corporal William Angus features a number of times on my blog, he dies during the First World War and received the Victoria Cross for bravery. Before volunteering for the army he was with Glasgow Celtic. This is an anonymous, unnumbered silk, similar to the set produced by Godfrey Phillips Ltd. but this set is longer, measuring 70 x 70mm, with paper backing inscribed in grey. I have been unable to track down an image of the William Angus silk, so I've included a scan of one of the others.
Lance-Corpl. Wm. Angus
Posted by Alan Jenkins at 12:00:00