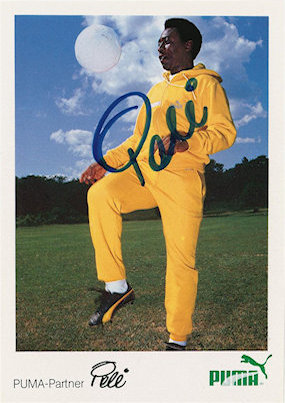 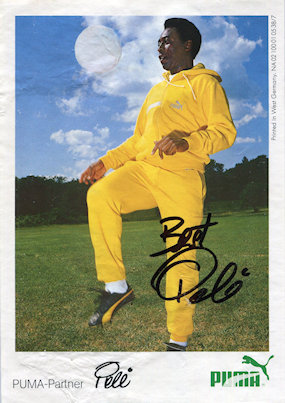 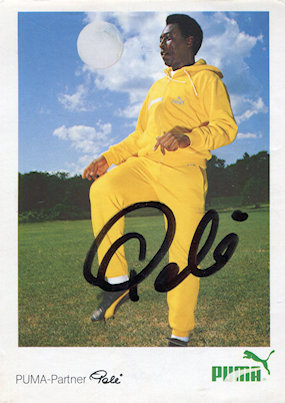 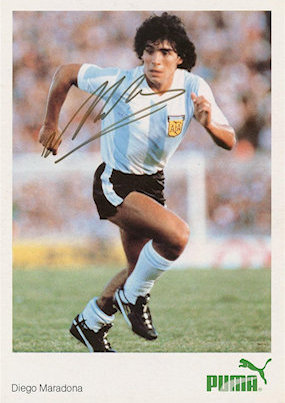 1980's
Footballers
Puma
? postcards
I know the Pele card is often referred to as being issued in the 1970's but I am listing these cards as '1980's' mainly due to the Maradona card. He first played for Argentina in 1977. He played a few times for the senior team after that but he didn't make a name for himself until the 1979 World Youth Championships. In 1979 and 1980 Argentina played in round-necked jerseys. It was only in 1981 that they changed to v-necked jerseys. I wouldn't mind betting that the photo of Maradona was taken at a game against Brazil in 1981. As both the Maradona and Pele cards are of a similar design I presume they were issued around the same time. Gregory Graetz has provided all the images, with three different versions of the Pele card shown. The second one includes a reference to being printed in West Germany near the top in the right-hand border and the third one has a smaller facsimile autograph to the other two.
Diego Maradona
Pele
Pele - Printed in West Germany. NA 02 100 01 05 38/7
Pele - smaller facsimile autograph
Posted by Alan Jenkins at 14:30:00