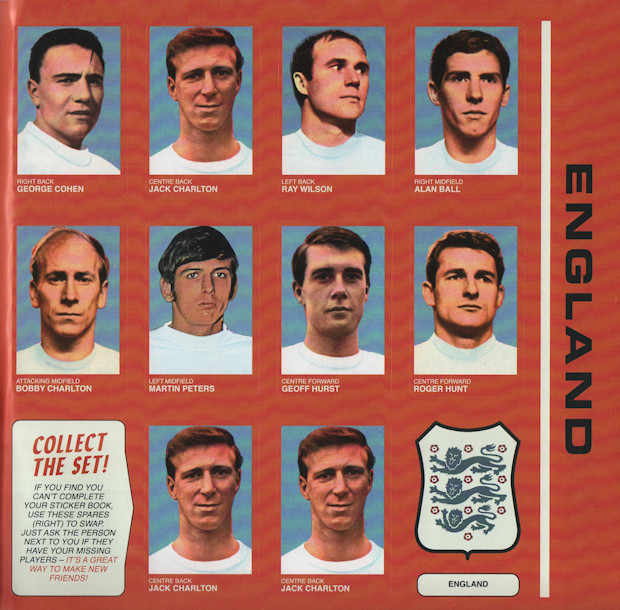 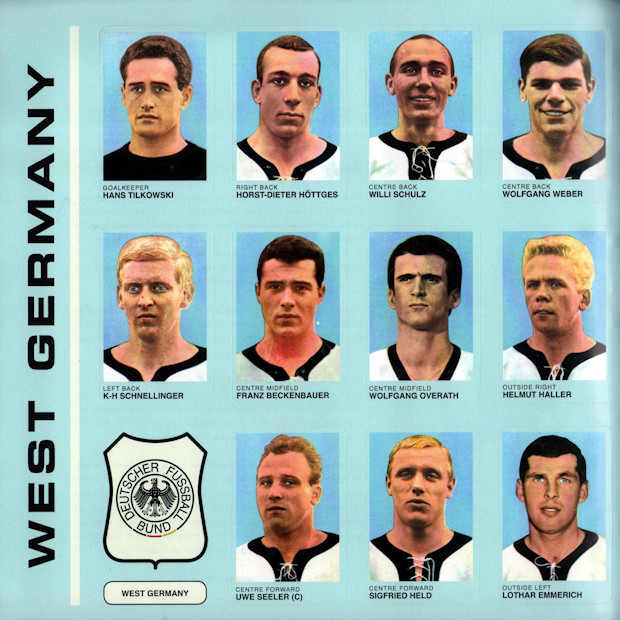 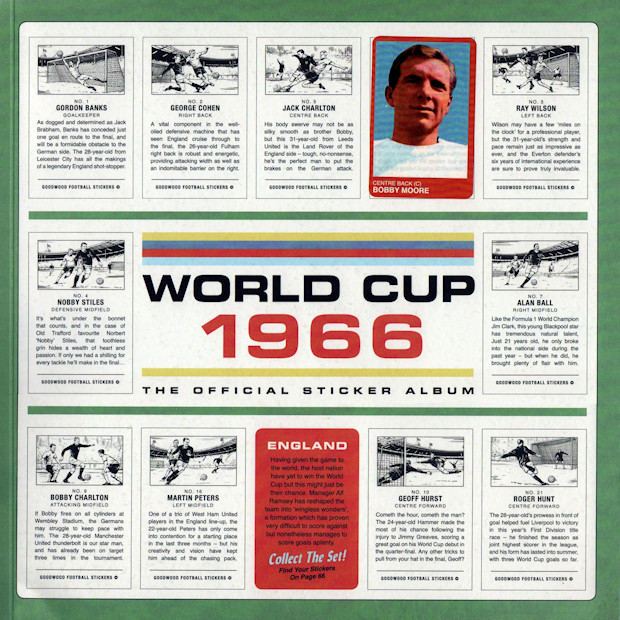 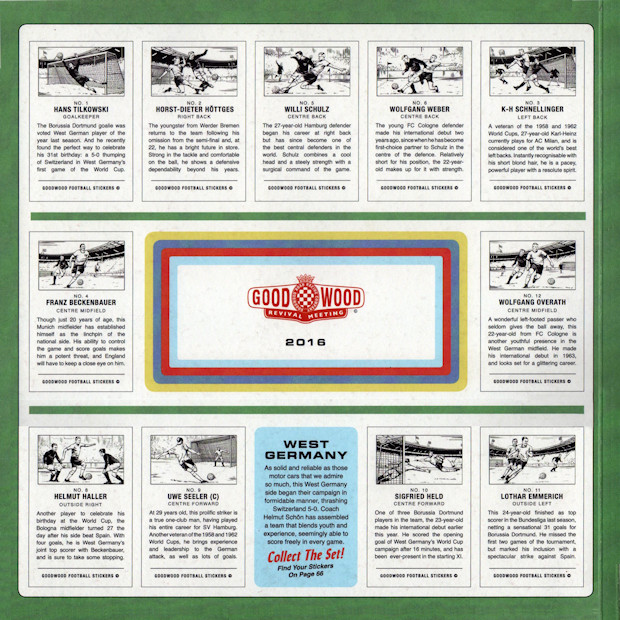 2016
World Cup 1966 The Official Sticker Album (2016 Goodwood Revival Brochure)
2016 Goodwood Revival Meeting
24 stickers
Steve Marsh has provided the scans and information about this item, I'll let him explain:
The meeting is held each year at Goodwood and in 2016 they celebrated the 50th Anniversary of the 1966 World Cup.
The Brochure outer cover was produced to resemble a sticker album featuring the World Cup final players. Bobby Moore was already stuck in place on the cover the remaining 10 players were inside.
The Brochure is dedicated to the Motor Car event, but the middle pages had two sticker pages, one for England, one for West Germany. The idea was to peel off the stickers and insert them on to the outer cover. The brochure has 98 pages produced on quality paper and measures 9½" x 9½". The England team is not complete, instead of Gordon Banks and Nobby Stiles the sheet includes two spare stickers of Jack Charlton, encouraging collectors to swap with others at the event in order to complete the album.
The following is an extract advising the event:
The Goodwood Revival 2016 was held during the weekend of September 9-11 at the 7-turn, 2.4-mile Goodwood Motor Circuit in West Sussex, England. As the heat of the British summer began to fade and an autumnal chill cooled the air, Goodwood Motor Circuit in the South of England, played host to the most acclaimed historic race meeting in the world. With the turning of the seasons, so too came the chance for discerning motor racing fans to turn back the clock for a blissful weekend of dressing up and retrospective revelry at the Revival.
While the 2016 Goodwood Revival remembered the sounds, fashions and tastes of the 1940s, ’50s and ’60s, the main focus was ‘Life in 1966’, the year Goodwood Motor Circuit first closed its doors to racing. Fifty years on, the drivers and manufacturers returned to Goodwood this weekend, now considered the spiritual home of British motor racing, for the yearly and nostalgic showcase of motor sport’s Golden Age. Track parades and competitive racing allowed fans and enthusiasts to celebrate Formula One’s 1966 ‘Return to Power’, Sir Jack Brabham’s third Formula One world title and career, and more broadly the English football team’s 1966 World Cup victory, which helped to set the scene both on and off track.
Bobby Moore (attached to cover)
George Cohen
Jack Charlton
Ray Wilson
Alan Ball
Bobby Charlton
Martin Peters
Geoff Hurst
Roger Hunt
Jack Charlton (spare)
Jack Charlton (spare)
Emblem
Gordon Banks
Nobby Stiles
Hans Tilkowski (West Germany)
Horst-Dieter Höttges (West Germany)
Willi Schulz (West Germany)
Wolfgang Weber (West Germany)
K-H. Schnellinger (West Germany)
Franz Beckenbauer (West Germany)
Wolfgang Overath (West Germany)
Helmut Haller (West Germany)
Uwe Seeler (West Germany)
Sigfried Held (West Germany)
Lothar Emmerich (West Germany)
Emblem (West Germany)
Posted by Alan Jenkins at 17:00:00