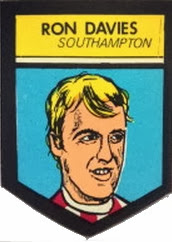 It's surprising how often things surface after so many years, that are almost unknown. There's been a lot written about B.A.B. stickers lately and some collectors, myself included, thought they knew almost all there is to know about them. Then, out of the blue Nigel Mercer's site (Nigel's Webspace - Galleries of English Football Cards 1965/66 - 1979/80) provides examples of five stickers from a totally unknown series! I've borrowed one sticker from Nigel's site, you can find this one and the other four by following this link: http://cards.littleoak.com.au/197071_bab_players_yellow_headers/bab_players_yellow_headers.htm. There must be more out there - anyone?

Email ThisBlogThis!Share to TwitterShare to FacebookShare to Pinterest
Labels: B.A.B.