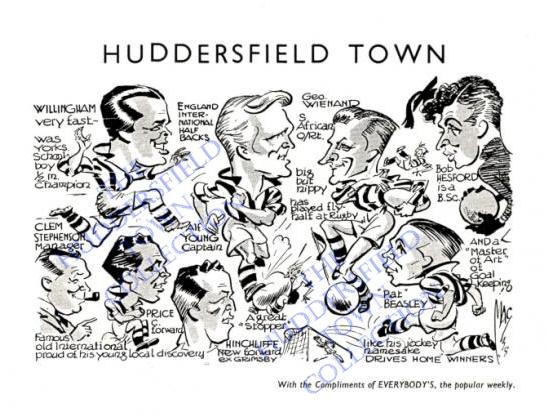 Roger Pashby has sent me this scan of a large card in his collection featuring caricature of eight players and issued as a supplement to Everybody's, the popular weekly. Roger thinks it was issued around the time of the 1938 F.A. Cup Final, which might mean there's a Preston North End card out there waiting to be discovered. Follow the link to see more of Roger's Huddersfield Town Collection.
The card is not in my database and the magazine doesn't feature in any of the Cartophilic Society of Great Britain reference books.
It seems that Everybody's started life as The Competitors' Journal on 14 March 1913. A little over twelve years later, on 25 April, 1925, it became Competitors' Journal and Everybody's Weekly. For a short while between 1927 and 1928 the names in the title were switched so that the magazine was then called Everybody's Weekly and Competitors' Journal. This name was shortened to Everybody's Weekly on 9 June, 1928 The title was shortened even further to Everybody's on 1 February 1930 and it remained as right through to it's final issue on 25 April, 1959.