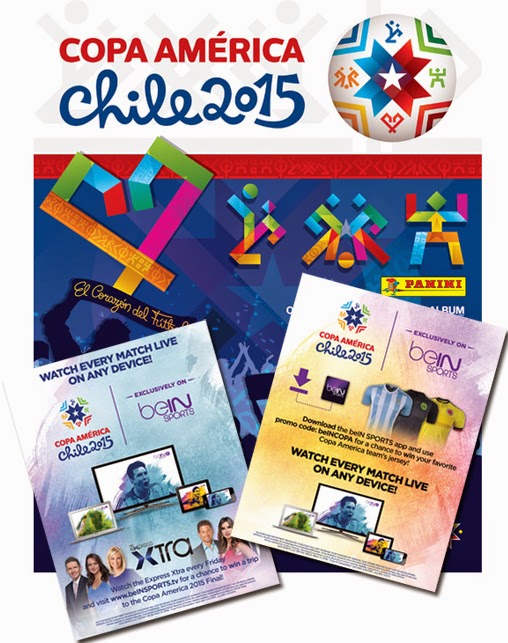 22 May, 2015 by Tracy Hackler, The Knight's Lance, Panini America
In conjunction with the North American release last month of the official Copa America Chile 2015 Sticker Collection, Panini America and beIN Sports have teamed up for a special social media initiative that will last throughout the tournament and reward loyal soccer fans with the opportunity to win great prizes such as a trip to the final match in Chile, a beIN Sports studio tour in Miami and national team jerseys.
North American collectors busy completing their official Copa America Chile 2015 Sticker Collections no doubt started participating in the promotion shortly after first cracking their albums, tipped off by beIN Sports ads featured on the inside front and back covers. But just in case you haven’t secured your album just yet, we provide complete contest details after the jump.
There are three different Panini America/beIN Sports promotions being conducted throughout Copa America Chile 2015:
For more information be sure to pick up your official Copa America Chile 2015 Sticker Album today at mass retail outlets across North America or at iCollectPanini.com.