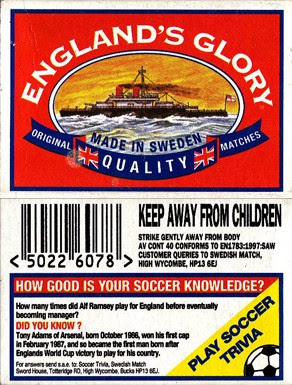 Matchbox labels now, a set of 36 Soccer Trivia labels were produced, each containing one question and one fact.

I also beleive that there was a set with a Scottish theme issued on the boxes of Scottish Bluebell matches, that are also produced by Swedish Match.

I've got information on three of them, but I'm looking for details of all 36 England's Glory issues and however many there were of the Scottish Bluebell version:

Soccer Trivia:  How many times did Alf Ramsey play for England before eventually becoming manager?
DYK?  Tony Adams of Arsenal, born October 1966, won his first cap in February 1987, and so became the first man born after Englands World Cup victory to play for his country.

Soccer Trivia:  Peter Shilton faced 15 penalties during his 125-cap England career. How many did he score?
DYK?  Dave Watson was capped for England while with each of five clubs - Sunderland, Manchester City, Werder Bremen, Southampton and Stoke.

Soccer Trivia:  Paul Gascoigne scored his first England goal at Wembley in April 1983. Against which country?
DYK?  Billy Wright became the first footballer of any nationality to win 100 caps when he played against Scotland in 1958.